I'll also be using pseudo Java in these examples instead of traditional math. This means when I use terms like Set, I am referring to the group of classes that implement a Set in Java. Of course a set in Java shares a lot of properties with a set in maths, but keep in mind that this is written from a developers point of view.

What does it mean when we talk about document similarity?

The whole point of MinHash is to efficiently answer the question "How similar is this document to that document".

Before we can answer that question, we need to look at a more simple example of two sets of strings and determine how similar they are.

Here are our two sets:

While a document can be though of as a giant set of words, we don't just break down a document into individual words, place them in a set and calculate the similarity, because that looses the importance of the order of the words. The sets

would be considered 100% similar, even though they clearly are not.

These sets of shingles can then be compared for similarity using the Jaccard Coefficient.

So we now have a way to compare two documents for similarity, but it is not an efficient process. To find similar documents to document A in a directory of 10000 documents, we need compare each pair individually. This is obviously not going to scale well.

Now instead of matching 9996 shingles to 19996 other shingles, we are are comparing 200 shingles to another 200 shingles. We have reduced our workload at the expense of accuracy, but this is still good enough for most scenarios.

NOTE
So just how much accuracy did we sacrifice by comparing only a small subset of randomly selected shingles? I actually don't know, but I assume it sits on a bell curve where the number of random selections improves the accuracy to a point where more random selections won't provide any meaningful increase in accuracy. If you know the math behind this, please leave a comment.

So this is where MinHash comes in.

We could save the 200 randomly selected shingles, but storing variable length strings kinda sucks. It complicates database design and comparing strings is slow.

The clever part about MinHash is that it allows us to save integers instead of strings, and also takes the hassle out of randomly selecting shingles. It works like this.

1. Break down the document a set of shingles.
2. Calculate the hash value for every shingle.
3. Store the minimum hash value found in step 2.
4. Repeat steps 2 and 3 with different hash algorithms 199 more times to get a total of 200 min hash values.

At this point instead of 200 randomly selected shingles, we have 200 integer hash values. This is effectively a random selection of shingles, because a good hash algorithm is supposed to generate a number that is as likely to be large as it is likely to be small. This kind of distribution of hash codes is what hashing is all about, so selecting the smallest hash is, for all intents and purposes, a random selection of a shingle.

So you see the String.hashCode() method, but where do these other 199 hash codes come from? This is the step that most explanations on the MinHash algorithm conveniently leave out.

Great, but I still have to compare every document to every other document. Can this be optimized?

This is where the second neat trick of MinHash comes in.

Locality sensitive hashing (LSH) involves generating a hash code such that similar items will tend to get similar hash codes. This is the opposite of what .hashCode() does.

LSH allows you to precompute a hash code that is then quickly and easily compared to another precomputed LSH hash code to determine if two objects should be compared in more detail or quickly discarded.

We don't actually calculate a LSH hash code as such, but the idea of a boiling down a complex object (like our collection of minhash codes) into something that is quickly and easily compared with other complex objects is still applicable.

So conceptually the minhash values from 5 documents in the first of the 5 bands and its rows looks like this.

What we are looking for are rows within a band that are the same between documents. Document One and Document Three in this case both have rows with values 1, 3, 6, 0. This tells us that these two documents should be compared for their similarity.

This is useful when you have a document, and you want to know which other documents to compare to it for similarity. I'll assume that the minhash values are stored in SQL, so to get out candidates for comparison you would write:

This explanation completely glosses over why this works and what combination of bands and rows you should construct when looking for similar documents. If you want to get into that detail, take a look at http://infolab.stanford.edu/~ullman/mmds/ch3.pdf.

For MinHash, you are taking the set of all unique shingles (between the two documents) and trying measure the fraction that are common to both documents, which is defined to be the document similarity. If the fraction is p, a randomly selected shingle has probability p of being a common shingle, and probability 1-p of being a non-common shingle -- this is known as a Bernoulli distribution. The standard deviation of a Bernoulli distribution is sqrt(p*(1-p)). So, the average of N Bernoulli samples will have a normal (bell-shaped) distribution with standard deviation sqrt(p*(1-p)/N). But, we don't know p -- that's what we are trying to measure. The largest possible value for the standard deviation occurs when p=0.5, so we know the standard deviation is at most 0.5/sqrt(N). To have 95% confidence that the true value is within our estimated range, the range should be plus or minus 2 standard deviations. So, a conservative estimate for the uncertainty in our result is plus or minus 1/sqrt(N).

Ryan Moulton said…
This comment has been removed by the author.
10:56 am

Ryan Moulton said…
If you'd like to incorporate weights info the minhashes, (for instance, for counting tokens more than once, or for idf weighting) I wrote a guide for how to do that here: Minhash
10:57 am

ed pills said…
This is really interesting, You are a very skilled blogger. I have joined your feed and look forward to seeking more of your magnificent post. Also, I have shared your site in my social networks!
11:32 am

ed medication said…
Its not my first time to visit this website, i am visiting this site dailly and get fastidious data from here all the time.
11:49 am

erectile dysfunction treatment said…
Hi there, just became alert to your blog through Google, and found that it is really informative. I'm going to watch out for brussels. I will appreciate if you continue this in future. Many people will be benefited from your writing. Cheers!
3:49 am

erection pills said…
I'm gone to say to my little brother, that he should also pay a visit this web site on regular basis to obtain updated from most up-to-date news.
3:51 am

sparkdeveloper said…
thank you . can you share the code ? please.

March 08, 2015
When connecting to a VPN I was constant getting the error Mar  8 09:29:27 openvpn[1696]: Authenticate/Decrypt packet error: cipher final failed I had imported the supplied ovpn file and had followed all the other configuration steps, so this was quite frustrating. Then I saw this in the logs: Mar  8 09:31:07 openvpn[1790]: WARNING: 'cipher' is used inconsistently, local='cipher BF-CBC', remote='cipher AES-256-CBC' Changing my client to use "cipher AES-256-CBC" instead of the default (which apparently was cipher BF-CBC) fixed the issue.
Read more 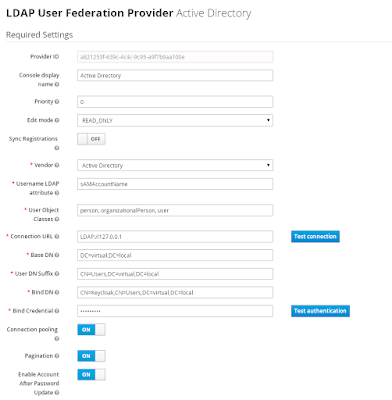 The following instructions show you how to configure Keycloak with Windows AD in order to use Kerberos authentication. Assumptions The Kerberos realm is VIRTUAL.LOCAL The hostname used to access Keycloak is virtual.local. This just means we are running Keycloak on the domain controller. In production virtual.local will be replaced with something like keycloak.dev.virtual.local or something like that, giving you a SPN of  HTTP/keycloak.dev.virtual.local@VIRTUAL.LOCAL Configuration Create a windows domain account called Keycloak. Run the following command to assign a SPN to the user and generate a keytab file: ktpass -out keycloak.keytab -princ HTTP/virtual.local@VIRTUAL.LOCAL -mapUser Keycloak@VIRTUAL.LOCAL -pass password1! -kvno 0 -ptype KRB5_NT_PRINCIPAL -crypto RC4-HMAC-NT Verify the SPN has been assigned to the user with the command: setspn -l Keycloak Configure the LDAP settings in Keycloak like this. Since we are running Keycloak on the domain controller, we ref
Read more